Traditionally, tobacco regulation has majored on controlling access to cigarettes through taxation, advertising bans and packet warnings, bans on public smoking and youth access and all the panoply of regulation to reduce the death and disease toll from the most dangerous way of consuming nicotine.

And then from 2006 onwards a disruptive technology emerged – the vaping device allowing consumers to enjoy nicotine (yes, enjoy) without all the risks consequent on sparking up a cigarette. US smokeless and snus had been around for much longer, but arguably it has been the disruption caused by the vaping revolution that brought the health benefits of these other non-combustibles into the light through new epidemiological and clinical evidence.

The weight of scientific and medical argument is now overwhelming for assisting smokers to switch away from combustible tobacco products towards safer nicotine products (SNP).

However, as Clive Bates recently outlined, the trenchant opposition to tobacco harm reduction (THR) is well-organised and well-funded. It’s an opposition, he argued, based on an instinctive distrust of innovation and an opportunity for the by now tired warriors of the tobacco wars to become re-invigorated in a new battle against the dark forces of Big Tobacco.

But if the real concern about the smoking epidemic could revolve around public health rather than virtue-signalling moral agendas against the use of nicotine, there would be some serious consideration to re-writing of the Framework Convention on Tobacco Control (FCTC).

Regulation needs fundamentally to distinguish between combustible and non-combustible products – not between tobacco and non-tobacco. True, more dangerous types of smokeless products are popular especially in Asia, but every journey starts with one step – and redrafting the focus of the FCTC would be a huge one.

The first salvo in this revolution has been fired by Knowledge-Action-Change (K•A•C)  and the UK’s National Nicotine Alliance (NNA) in their submissions to the UK Department of Health’s snappily titled consultation on the Tobacco and Related Products Regulations 2016 and the Standardised Packaging of Tobacco Products Regulations 2015.

Their headline call is for regulations to shift focus on to whether a product is a combustible tobacco product or a non-combustible product, to accurately place the emphasis on reducing the health risk to consumers. This puts distance between cigarettes and similar products on the one hand, and vaping and heated tobacco products and smokeless snus on the other. 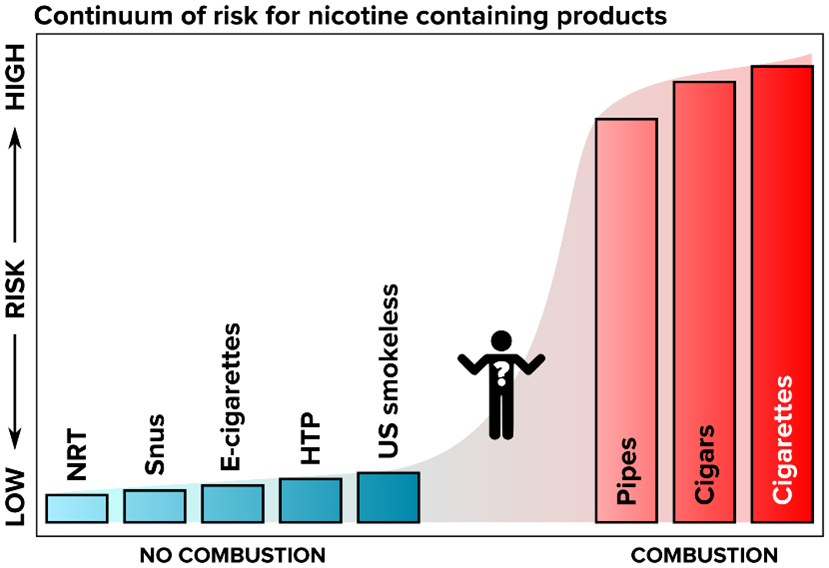 There should be no differentiation within the non-combustible category based on risk, but consumers should be able to access accurate information on the different risk profiles of the various products on the market.

In light of the UK’s departure from the EU, both NNA and K•A•C are pressing the UK government to build on its enlightened response to vaping and now embrace all SNP while dispensing with the anti-THR measures enshrined in the EU Tobacco Products Directive (TPD).

Importantly, this THR approach does not seek to replace current tobacco policy, but to complement it in assisting those who for whatever reason cannot or don’t wish to give up nicotine. Nor does it attempt to undermine any other route out of smoking like counselling, NRT or medication.

In the same way that the UK has pioneered an evidence-based public health response to vaping, it could also lead the way in respect of reforms at a global level – not least because it is a major contributor to the finances of the WHO FCTC Secretariat providing 70% of the annual funding.

In the drive to a UK free of tobacco smoke, the imperative is to give smokers every opportunity to switch away from smoking and not put unnecessary barriers in the way - which is currently the fall-out from the EU TPD. As the NNA submission states, a THR approach “works through market forces, relying on private sector innovation and, importantly, the free choices of consumers to protect their own health and wellbeing on their own “

No doubt the WHO would still want to promote distance between public health and the tobacco industry but radical change to the FCTC would make any new guidance more nuanced. If the WHO were to accept the concept of THR as a legitimate way of tackling smoking-related death and disease, it would have to sit down with manufacturers of THR products in the same way it speaks to the pharmaceutical industry about NRT.

But Big Tobacco also make THR products. Then what? Well, the WHO doesn’t seem to have a problem with China having a seat round the FCTC delegate table (the Conference of the Parties or COP) – a country with the biggest tobacco company in the world – and err...100% state-owned.

The very reason that harm reduction is even in the FCTC is because the Convention architects sat down with the industry who at the time were trying to develop safer nicotine products but ultimately failed. Even so, that there might be innovation in time, was reflected in the commitment to review the Convention in the light of new technological, scientific and clinical evidence.

The direction of travel of the FCTC members is perversely the opposite of what the evidence points to. What the WHO (in cahoots with the EU) appear to be cooking up for the next COP meeting is an abrogation of international public health treaties: these treaties underline the importance of health for all with nobody left behind (even smokers, folks) and the opportunity for every citizen to determine their own health.