A quick check on Google Images will throw up (no pun intended) posters like these while YouTube will oblige with doom-laden videos about the iniquities of vaping. Which naturally started me thinking about this sort of campaigning in general aimed at preventing young people using drugs, alcohol, tobacco and all the other stuff we don’t want them to do -  and its largely inglorious and pointless history. 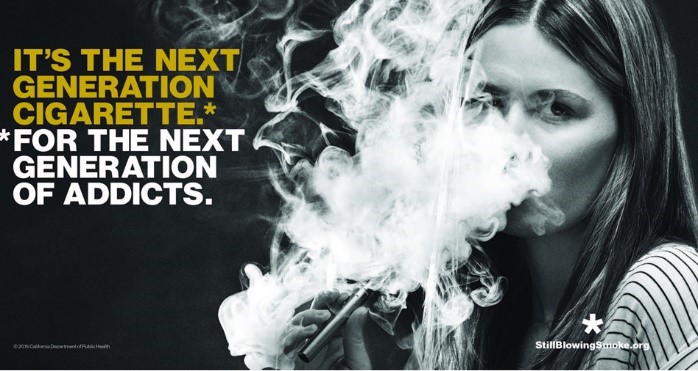 In the main, the aim has been neither to educate nor inform, but simply to shock teenagers into abstention.  Some years ago, I wrote a book called ‘Shooting Stars; drugs, Hollywood and the movies’ (available in no good bookshops anywhere) which included a section on teen-focused anti-drug material and involved spending many happy hours watching American anti-drug commercials from the 1960s. They often followed a similar storyline of the clean-cut kid who smokes one spliff, starts hanging around with the ‘in crowd’, the focus of which is the ‘cool dude; in a roll neck sweater (what was that about?) playing bongos (presumably coded racism for wild jungle rhythms).  Inevitably young Mr Clean rapidly descends into a quagmire of desperation.

A UK drugs charity in the 1970s specialised in posters depicting kids on mortuary slabs dead from drugs while early anti-smoking campaigns in the UK majored on man with clipboard and white coat displaying diseased lungs in jars.  Most research into the impact of ‘shock’ public health campaigns reveal a decay response – an initial determination to quit smoking which in the following days diminishes to the point of no action. And as time went on, it didn’t get much more sophisticated than that.

During the 1990s, when ‘Cool Britannia’ was at it height and rave culture dominated the teenage landscape, there were some ridiculous attempts by the English government to warn kids off drugs. The process seemed to involve engaging some hip brand company with a daft name like Crazy Biscuit to send along their’ brand manager’ (who usually looked like he should be in school) to show us ‘stakeholders what had already been signed off by Ministers.

The upshot included such classic ads as - young guy goes into Brain Shop to try and trade-in his cannabis addled brain for a new one. Then there was  somebody pretending to be a naturalist observing a house party through a window and describing the scene as if the kids inside were animals in their native habitat. Most bizarre featured Pablo the dead dog who dies carrying cocaine inside him. Never did work that one out.  Don’t feed your dog cocaine with his Woofy Chunks??

At least the UK has stopped this nonsense, leaving the field to the US CDC, various states like  California, a bunch of medical organisation and the Campaign for Tobacco-Free Kids to carry the torch for hopeless stunts and pernicious propaganda about e-cigarettes

So what can we make of all this? Certainly, public officials and politicians feel obliged, and come under pressure from the media and parent campaigning groups, to undertake ‘awareness’ campaigns to warn young people (and adults) about the risks attached to using various sit was ubstances. Politicians are scared of accusations of being ‘soft on drugs’  and so demand something either hard hitting or can be persuaded that something ‘amusing’ will play well with ‘da yoof’.

However, what is deemed amusing invariably depicts young people as idiots or sheep who just follow the flock (cf another recent anti-vaping poster). But aside from the ethical implications of constructing a public health campaign on a bedrock of lies, the bottom line on this is that there isn’t a shred of evidence that any of this actually works in either changing behaviour or diverting somebody away from an intention to use. As shown in the UK anti-heroin campaign from the mid-1980s, those who were most affected by the campaign had no intention of using anyway – and those already using just ignored it. Nancy Regan’s ‘Just Say No’ campaign fared little better even though it was credited with rolling back the tide of cannabis decriminalisation that saw 11 states reform their laws. The only reason those laws were revoked was once Regan, R took over, these states were threatened with a removal of Federal funding if they didn’t comply.

Maybe some of the millions wasted on inept, insulting and morally bankrupt advertising could be better spent on an initiative that school students could genuinely get behind. Not e-cig wars, but something really life-threatening.  How about The Campaign For A Gun-Free World?

What I find totally baffling about the cult of anti-harm reduction whose members seem less concerned with public health and more focused on sticking it to Big Tobacco – is that by trying to wipe out the safer nicotine product (SNP) business, they are playing right into the hands of their sworn enemy. If smokers can’t access SNP, what do these zealots – who are probably quite smart people albeit blinded by an often faith-based morality -  think will happen?

Well the Indonesian Government is in no doubt. Taking his cue from Marie Antoinette’s famous statement, ‘Let them eat cake’, the trade minister responded to questions about tougher e-cigarette regulations cutting off supplies to consumers with, ”they can just smoke cigarettes”. Which is exactly what these kids are doing. Can the government really be happy with this?

As the Beast from the East swirls across the UK, bringing with it not only lots of snow and Siberian cold, but also a breath of fresh air in the Russian recognition of the harm-reduction benefits of SNP through regulations that will separate SNP from combustible cigarettes

Two hospital trusts in eastern England have reported a significant reduction in smoking since the introduction of outside vaping as opposed to smoking areas and a more proactive approach on the part of staff to encourage people not to smoke.

Over in NZ, an article in the New Zealand Medical Journal suggests that e-cigarettes could be helpful for alcoholics undergoing detoxification in hospital. Lead researcher Dr Penelope Truman said:

"Using electronic cigarettes for smoking substitution or reduction while in hospital is an option for improved patient management that should be explored further."

On February 20, 2018 several organisations filed amicus (“friend of the court”) briefs in support of Plaintiff-Appellants Nicopure Labs’ and the Right to be Smoke-Free Coalition’s appeal in the Deeming Rule challenge now pending in the U.S. Court of Appeals for the D.C. Circuit.

Something did occur to me. Given the overwhelming evidence that smoking is highest among poor and marginalised groups wherever they are in the world, I wonder what would happen if a group of Aboriginal smokers launched a class action against the Australian government for denying them the right to health and so breaching their human right by denying them ready access to safer nicotine products.

Couple of OMG media stories about vaping. One concerned levels of metal exposure which was analysed by Dr Farsalinos who unsurprisingly was able to highlight the study flaws and another from guess who about vaping causing heart attacks. To get the facts behind the headlines, click here

And finally…if you’ve got £1500 to spare, you could always sign up for Bath University’s week long course on how to monitor Big Tobacco. (Food and accommodation extra). Or you could just spend the money giving out e-cigarettes to homeless and mentally ill smokers.