You would think that any government looking at these figures for the steep decline in smoking among those under 25 would be a cause for celebration, Yes, over the same period, snus use has gone up, but that blows a hole in the gateway theory while all the independent evidence makes it clear that snus is so much safer than tobacco. The government gets what it wants – dramatically reduced smoking rates among young people (and among the population overall) while the population at large including young people make the consumer choice to use a safer product. Win-win? No, not at all. 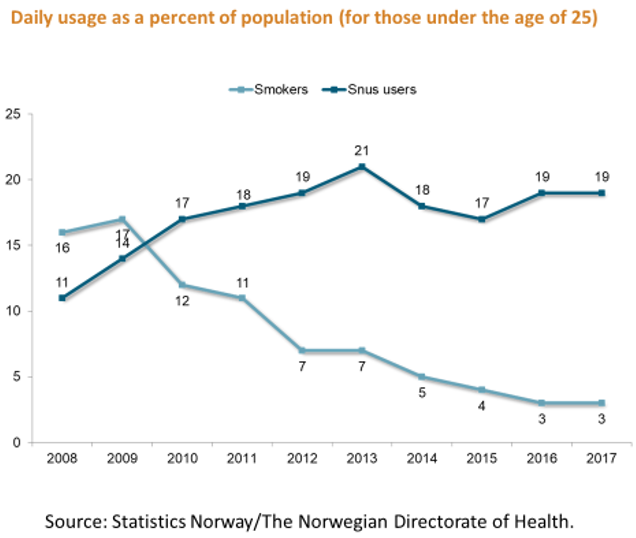 On the strength of the rise in the number of younger snus users, the Norwegian government decided to intervene in the European Court of Justice case brought against the EU by the UK’s National Nicotine Alliance for the unethical ban on snus across the EU.

Dr Karl Lund, Research Director of the Norwegian Institute for Alcohol and Drug Research, has kindly allowed me to describe his conversation with the Norwegian official Ketil Moen sent to give an oral presentation on behalf of his government.

Before the meeting, "I met Ketil accidently at the entrance of the European Court of Justice and told him I was surprised that an official representative for Norway was there to present an oral statement as long as Norway refrained from submitting a written statement. Mr Moen replied that he had been chosen by the Norwegian health authorities to go to the ECJ to put forward the official view, and that it was common practice that Norway as member of the EEA (and not the EU) would present orally without any prior written statement. I wished him luck and said I trusted that he would not say anything stupid. I was so wrong."

"I got the chance to speak to Mr Moen as he left the court room. I referred to my prior conversation to him and said how sorry I was to hear him talk so much bullshit. I confronted him with his repeatedly use of the term [snus] ‘epidemic’ and said that the diffusion of snus use in Norway had no such characteristics. I also asked for the empirical basis of the gateway-theory he had put forward. He replied that he was in no position to discuss these things with me, and repeated that he was there to present the official Norwegian view."

"My guess is that Mr Moen had been furnished with a manuscript from the Department of Health and Care Services without really been much involved in the drafting himself. Mr Moen was accompanied in the court room by two officials from the department. What I find inconsistent, is that Norway (a non-member of the EU) take on the effort to go to the ECJ to recommend the ban on snus to be upheld in the EU (and by that prevent European smokers from a ham-reducing alternative), while at the same time both of our two most recent Ministers of Health (Jonas Gahr Störe and Bent Höie) firmly rejected a proposal put forward by a governmental delegation in 2013 (the Tell-delegation) to ban snus in Norway. The whole thing is a bit fishy."

A bit like Jason being lashed to the mast to prevent being tempted by mermaids in the tale of the Argonauts, public health officials and clinicians are still clinging onto the wreckage of discredited research to avoid being tempted by the truth. The otherwise surprisingly reasonable US National Academy of Sciences report is a case in point, where the press release made sure the media would latch onto the ‘bad news’ story and they duly obliged with these among others:

NY Times: Vaping Can Be Addictive and May Lure Teenagers to Smoking, Science Panel Concludes

The Guardian: Teens who use e-cigarettes are more likely to try smoking

But as Professor David Adams from the Department of Social and Behavioral Sciences at NYU points out, the NAS report conveniently ignores any and all evidence that didn’t fit preconceived ideas such as “Lynn Kozlowski and Ken Warner's excellent (strongly science based ) DAD review of all the youth uptake studies including Leventhal's and most of the others in the meta-analysis . Kozlowski and Warner conclude (and we concur in our Annual Review of Public Health chapter and elsewhere in our comprehensive Glasser et al review of over 800 studies on e cigs) that the methodological shortcoming and small samples and other concerns about selection bias, shared liability etc do not warrant the strong conclusions and misleading press release”.

Professor Adams makes further telling observations, starting off with a quote from the philosopher and scientist Francis Bacon 400 years ago, “The human understanding when it has once adopted an opinion draws all things else to support and agree with it. And though there be a greater number and weight of instances to be found on the other side, yet these it either neglects and despises, or else by some distinction sets aside and rejects, in order that by this great and pernicious predetermination the authority of its former conclusion may remain inviolate.”

With leads to the rather depressing conclusion that it’s not about the evidence, stupid, instead from a purely political standpoint – the failsafe position is.

Back in the land of Smug UK, Public Health England have just published their latest review of e-cigarettes and HNB products. Their main findings should be projected onto the outside walls of the WHO HQ during COP 8. (Now there’s a thought)

Some of you may know that I have undertaken the Herculean task of writing and editing the very first Global State of Tobacco Harm Reduction report on behalf of the Global Forum on Nicotine. Be prepared for general pestering by me as I pump you for information and maybe ask for some wise words too.

As we know the general ‘state’ with some notable country exceptions, is pretty poor and most of that is due to the regulatory environment (both laws and taxation). So what I thought I would do is post new regulatory developments as they come up which will feed into the final report, but will be ongoing beyond that as we track THR in the coming years.

Vaping Post reports two bills in Hawaii could make it “a lot harder for Hawaiians to get hold of harm reduction products.” The first, SB2304 bans vape shops from opening within 750 feet of schools, parks or public housing and SB2654 aims to “end online tobacco sales,” including e-liquids.

Agencia EFE (ESP) reports Alvaro Perez, the commissioner for Health Cooperation with the Federal Commission for Protection against Health Risks (Cofepris), said vaporizers and their components are being sold clandestinely due to the lack of regulation. He told EFE, “They are products that have no transparent origin or production. There is also a health alert in place for 200 brands of tobacco products and 36 e-cigarettes.” Guadalupe Ponciano, the director of the Smoking Research and Prevention Program at the Public Health Department of Mexico’s Autonomous National University (UNAM), “What would be better would be strict regulation, just like for cigarettes, (with) pictograms (on the packaging) and (they) would have to pay taxes.”

Singapore Law Watch  summarizes Singapore’s new law, while the Daily Vaper reports some of Singapore’s “former smokers who have been vaping in the country say they will likely go back to cigarettes under the ban.”

Netral English (IDN) reports on the Indonesian government’s decision to impose a 57% tax on e-liquids, a move which could “turn off this newly grown industry.” Bima Yudhistira, an economist from the Institute for Development of Economics and Finance (Indef), “said the vape industry should be encouraged in developing because in terms of health considerations it is less risky than regular cigarettes.” He considered taxes on cigarettes “acceptable” but “unfair” in the case of e-cigarettes.

The Local Sweden reports Swedish Health Minister Annika Strandhäll announced a legislative proposal to ban smoking at outdoor restaurants, train platforms, playgrounds, and other public places. The proposal will also include requirements for snus to be “sold in packs of at least 20 portions to discourage non-users from buying the product.”